Every month we have a global healing session for our beloved Primordial Mother, Mother Earth. We want to welcome everyone who feels called to participate! In each healing session, a huge network of helpers around the Earth also participates.

If you are buzy that time, or if it’s in the middle of the night in your country, you can still take part in it. Just sit down whenever you can, and tune into the healingsession beyond time and space. Since time is an illusion it actually works!

During the healing session, we’re helping Mother Earth activate and spread the red female energy  from her inner core, of which there is an enormous deficit of today, in both the Earth’s and the human’s energy systems, since Mother Earth’s internal energy portals and energy channels have been shut down and blocked.

The resurrection of the female energy on Earth is an absolute prerequisite for the transition to the New Spiritual Age, which is also the Age of the Goddess, and these healing sessions are part of this necessary energy re-balancing.

Below you will find background and instructions for participating. The background information and instructions are based on information that Swedish channel Maria Bertram has channeled from Mother Earth herself, nature spirits, spiritual Masters, other civilizations in the Cosmos and the Divine Consciousness (”God”) during several years.

Thank you for your participation! Together we create miracles!

Click here to read the message from the cosmic network, about re-launching the healing sessions for Mother Earth.

Click here for a compilation of quotes about the importance of sending healing to Mother Earth from Maria’s different channelings.

Click here to download a mini guide with instructions for the healing session (a printable PDF-page), for those of you who want the instructions at hand without using a screen.

Background to the healing sessions

All energy in the Cosmos consists of the male and the female energy, and all development in the Cosmos, and on Earth, happens through the interplay between these two divine energy polarities. The male energy (yang) stands for ”light”, expansion, spirit, high frequency, intellect, activity, birth, and ”heaven”. The female energy (yin) stands for ”darkness”, regression, matter, low frequency, intuition, rest, decay/”death”, and the Earth.

The ultimate goal of all consciousness development is the balance between these energy polarities. When they are in complete balance with each other, together they create the Divine Light, which consists of half male and half female energy. The knowledge of the male and female energy is a timeless and all-embracing wisdom that applies to all living life in the Cosmos, from small organisms to entire galaxies. This ancient wisdom has long been suppressed here on Earth, but fragments of it are preserved in various cultures throughout the Earth, such as the yin and yang symbol and indigenous people’s worship of Mother Earth and Father Heaven.

The surplus of male energy on Earth

Today there is a HUGE surplus of male energy on Earth, and a HUGE deficit of female energy, both in Mother Earth’s and the human’s energy systems. The hidden forces that have manipulated humanity have used energy technology to deliberately shut down and block Mother Earth’s internal energy portals and energy flows.  The female energy has long been weakened, denied, and repressed on Earth to hinder human spiritual development.

Some examples are how ”darkness” is equated with ”evil” in our language, and how the female red energy in the Earth’s interior is associated with ”Hell”. But even though there most definitely exist a destructive darkness, there is also destructive light, and much of the destructivity that exists on Earth today is a result of destructive light. Some examples are the merciless capitalism, the never-ending environmental degradation, and the escalating technological and AI development, all of which are forms of unbalanced male light energy that seek to expand and destroy the female dark energy. In its pure form, the energy of darkness is as sacred as the energy of light, and today we should worship it more than ever.

Even though we have been manipulated, the human has a free will and has participated in the oppression of the female energy and Mother Earth. In other words, we have part of this karma, which must now be purified and healed before the Transition. The healing sessions for Mother Earth are part of this important healing process.

The transition to the Age of the Goddess

This energy balance has created a very critical situation for Mother Earth, and she goes through unspeakable suffering every day. But together we can help her to gradually restore the energy balance and relieve her suffering, and it will also mitigate the risk of major natural disasters with the increase in energy that is now taking place on Earth. It’s part of humanity’s life task to balance Mother Earth’s energy system and to work with the female energy within her. She is dependent on us, just as we are dependent on her. We are ONE with Mother Earth. She is our Primordial Mother, and we are her guardians. Humanity is now becoming ready to re-awaken to this timeless wisdom.

The surplus of male energy is also amplified by the large amounts of cosmic light that flows in over the Earth preparing for the transition to the New Spiritual Age. During the final Transition, Earths inner gates will open up permanently, and enormous amounts of female energy will flow to the surface. But in order for the Earth and humanity to handle this energy clash, we need to heal Earth and ourselves with the female energy as much as possible beforehand.

The male energy is a necessary part of the Earth’s energy raising, but the female energy is an equally necessary part. It’s humanity’s task to work to strengthen and spread the Earth’s female energies, to create the grounding base that Earth and humanity need to be able to receive the cosmic male light and undergo the consciousness raising and the Transition in the way that is meant to be. The union and balancing of the male and female energies – spirit and matter – is a necessary and decisive part of the Earth’s and humanity’s transition to the New Spiritual Age, or the Age of the Goddess.

About the Healing Sessions

Through these healing sessions, we work as channels for the female energy from the Earth’s inner core, and help to spread it in the Earth’s energy system and on its surface. During the healing session, a huge cosmic network, consisting of nature spirits on Earth, spiritual Masters and other civilizations in the Cosmos – all helping to balance, strengthen, and direct the flow of female energy to the places where it is most needed. Through the healing sessions, a gradual balancing of the Earth’s energy system is taking place, which helps both the Earth and humanity to become energetically ready for the final transition to the New Spiritual Age, which will take place within a number of years depending on the energy development on Earth.

These healing sessions have a huge impact on the healing of Mother Earth, beyond what we can imagine! The effect of healing increases exponentially with each new person participating. When we participate in the healing sessions, we also get to bathe in the energies that we channel, which stimulates our spiritual transformation in a very powerful way, since the human also has a huge lack of female energy. Like Earth, we humans need to create a balance between these two energy polarities in our energy systems, through deep grounding. 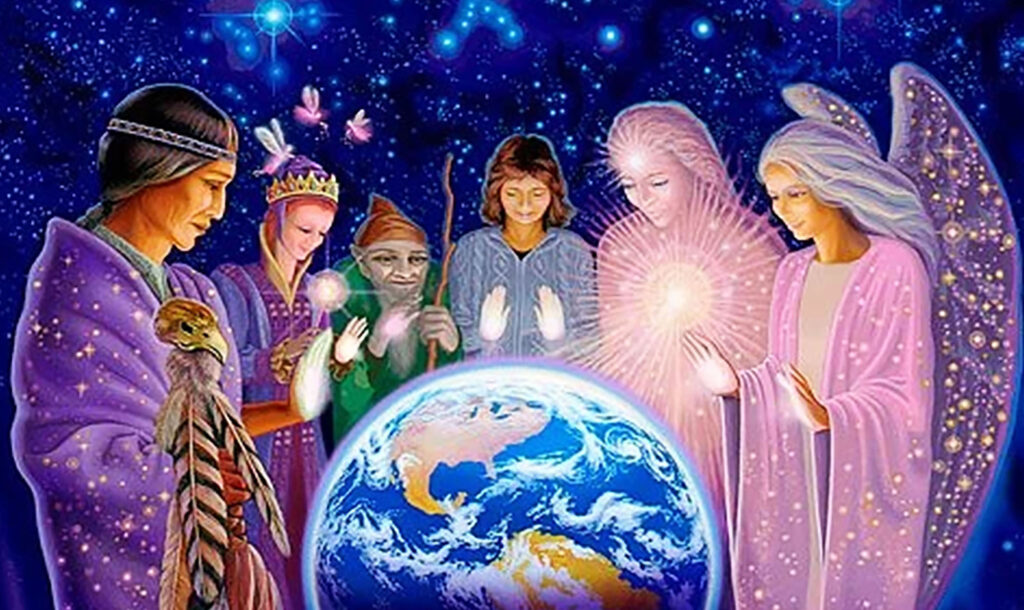 Sit down to meditate. Sit outside if you have the possibility. Avoid having technology near you if possible (human technology and it’s radiation are concentrated male energy). Make sure you have full contact with the seating area and the floor or ground. Hold your cupped palms together as in prayer and let them rest in your lap. Take a few deep breaths, relax your whole body, and clear your mind of distracting thoughts. Get mentally ready to work as a channel for the red Mother Earth energy and focus your intention on retrieving the energy from the Earth.

Read the prayer for Mother Earth (see below), aloud or in your mind. Visualize how a channel opens up from the center of the Earth, and how the glowing red female energy begins to flow up through your feet, rear and hands. Let the energy fill your whole body and then continue on from you to the worldwide network of nature spirits, spiritual Masters and cosmic civilizations, that will spread the energies to the places on Earth where they are needed most. Once you have opened up the energy flow, just focus on being present in the Now. It’s individual how the energy feels, but it works whether you feel anything or not.

Please note! Do not send white light to Mother Earth, and do not channel light through the crown chakra to her, since she will then get more of the high-frequency male energy she already has a surplus of. What Mother Earth needs to heal herself and rebalance her energy system and energy flows today is the low-frequency grounding female energy from her inner core. 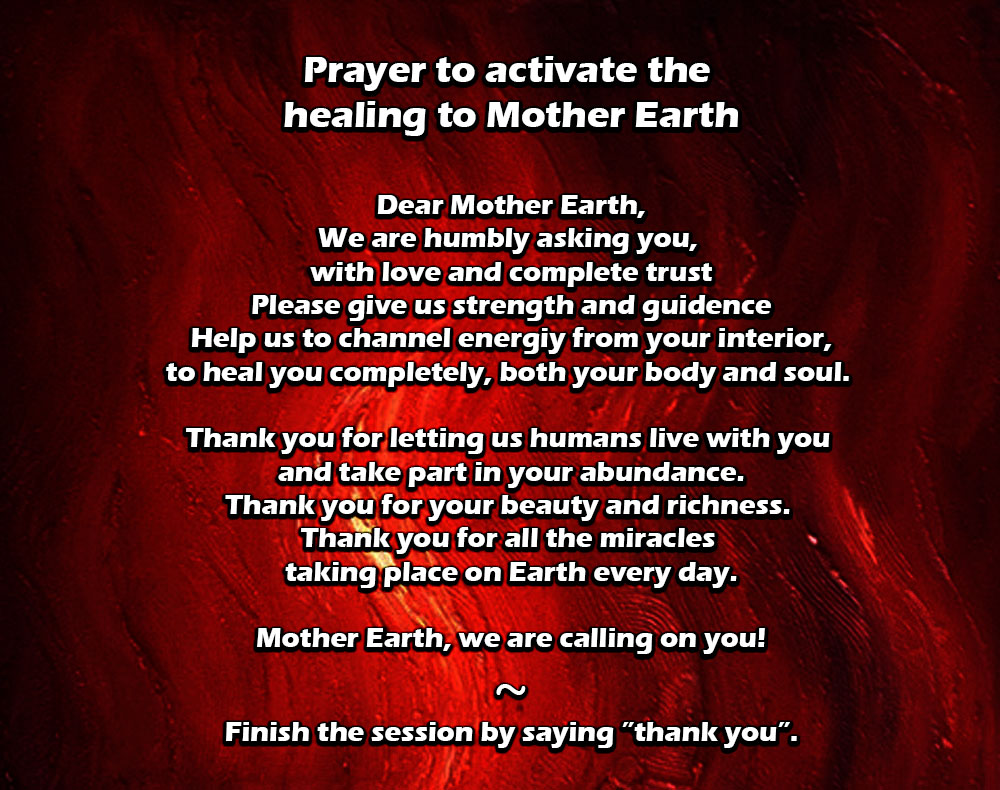